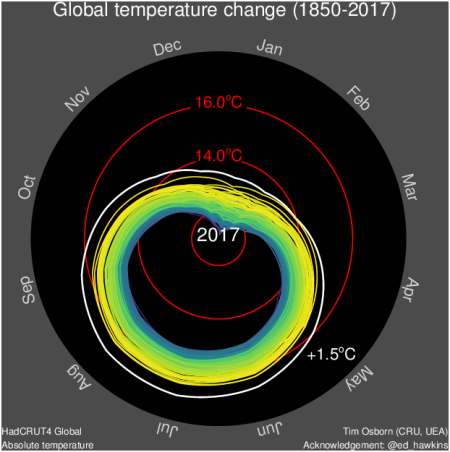 While captivating, this style of graph really comes into its own for variables that have clear seasonal structure (in their trends, or in their absolute values unless only anomalies are shown). Global temperature changes are similar for most months, leading to fairly concentric circles in the spiral graph.

Arctic sea ice volume (absolute value rather than anomaly or change) has a strong seasonal cycle and this is nicely captured by Ed’s spiral animation. See third image down at Ed’s climate-lab-book, copied here next. Seasonality is clear (no centred concentric rings), and it highlights how quickly we have headed towards zero sea ice volume in September, according to the PIOMAS analysis. 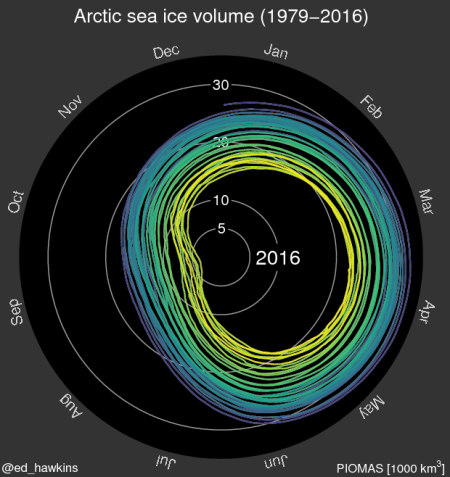 Turning back to global temperature changes, a dodecagon shape is apparent in Ed’s spiral graph. This is an unwanted artefact of joining monthly values with straight lines. If two consecutive monthly anomalies are 1.5°C above the baseline, the line won’t follow the 1.5°C circle but will instead dip inside it as it follows a chord of the circle. I’ve made a small modification to remove this artefact. 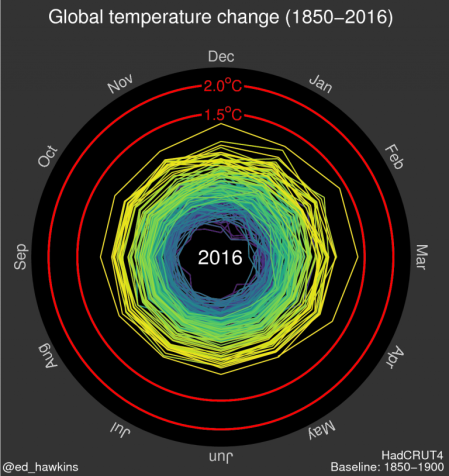 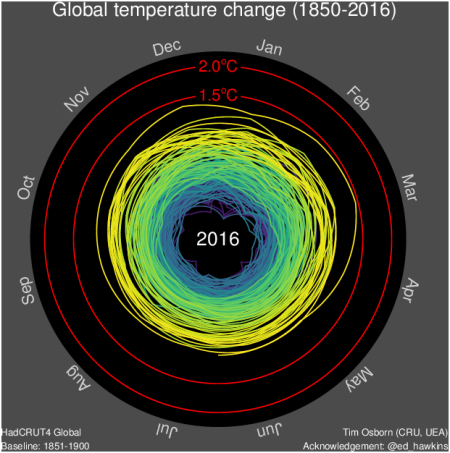 I’ve followed Ed’s design as far as possible to make the images easily comparable (including porting the Viridis colour table to IDL). The modification is that instead of joining the monthly values by straight lines, they are joined by curves whose distance from the central point (radius) changes linearly as the angle moves from one month to the next. A sequence of months at 1.5°C will now follow the 1.5°C circle and the dodecagon artefact is removed.

I wish I knew how to compress the animated GIF to < 1 MB as Ed has done!

This week, Gavin Schmidt tweeted the next graph of global temperatures (the GISTEMP version) that includes the annual cycle of absolute temperatures (values were still anomalies, but anomalies from the annual mean rather than from the mean annual cycle). It also reached a wide audience (e.g. tweeted from Barack Obama’s account). It’s useful for seeing the warmest absolute months, not just those with the greatest anomalies. 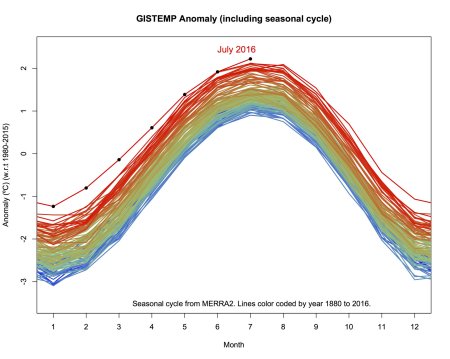 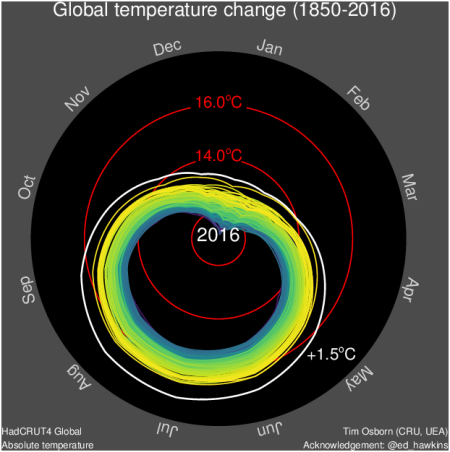 Comparing absolute temperatures with mitigation targets (e.g. 1.5°C above “pre-industrial”) now requires adding 1.5°C to the baseline annual cycle (represented here by the 1851-1900 mean of HadCRUT4 plus Jones et al., 1999) to obtain the white curve in the graph above.

But we don’t expect warming to be uniform across all months, so 1.5°C would be associated with a different amount of warming in each month. For the CMIP5 multi-model mean, there is little difference between monthly warming amounts (the amplitude of the annual cycle in global-mean warming is only +/-0.1°C for 1.5°C) so this makes little difference. Taking the CMIP5 multi-model mean warming between 1851-1900 (historical) and 2014-2043 (RCP4.5) shows 1.5°C annual-mean warming with this warming for each month Jan-Dec:

Making a +1.5°C reference curve by adding these monthly changes to the baseline annual cycle results in white line shown in spiral graph below. Not much different to the fixed warming above, so I haven’t animated this version. 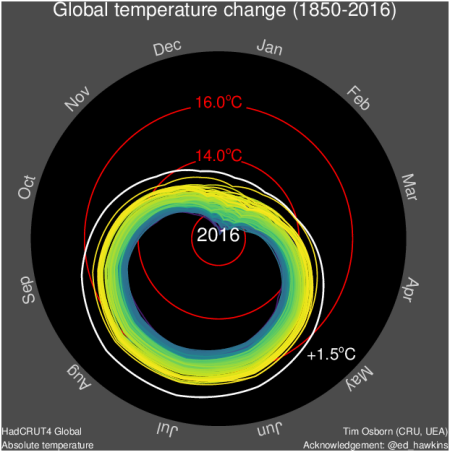 This entry was posted on 19 August 2016, 11:14 pm and is filed under Uncategorized. You can follow any responses to this entry through RSS 2.0. You can leave a response, or trackback from your own site.